Eating violets:Remembering a Poetry slam from a Month Past


A month ago I attended a poetry slam, and that might as well be an eon past in a wider culture structured to rush ceaselessly onward. We live in torrenting rapids, which threaten to smash to bits anything that can't keep pace. We hurtle into the latest event, temporal proximity lending to whatever is newest a heightened, if false, importance.

I say this as a way to note I am very late in writing about this slam. I recognize, however, that endless haste is a form of illness and will chose to live in the eternal Now, in which a poetry reading outweighs events much closer to us in time and (seeming) importance.

At the poetry slam, I was impressed by Lee Tran's recitation of Brenna Twohy's  "In which I do not fear Harvey Dent."

Lines from that poem, which likens coping with mental illness  to being a superhero,  still leap out at me:

"you have never seen me out of costume,would not even recognize me outside of this armor
...

When you have mental illness, society tells you your only power is your invisibility.
Tells you that they would save you if only they could see you,
but of course they cannot see you,
of course they will not save you, no matter how bright you sew your cape.
Invisibility is not a superpower,
it is the best weapon of a broken system
desperate to make their streets look clean
...

I know what it is to fight monsters.I know how strong an ordinary human has to be."

Joe Kingery read a poem called "A New Addiction Please" by John Brehm, which spoke eloquently to how upside-down our society is, asking why, instead of oil, we can't become addicted to the sun and the wind. Lichen Yang recited William Blake's "To See a World,"  going beyond the often quoted opening:

to the darker condemnation of human cruelty:

A dog starvd at his Masters Gate
Predicts the ruin of the State
A Horse misusd upon the Road
Calls to Heaven for Human blood
....

Joy & Woe are woven fine
A Clothing for the soul divine
Under every grief & pine
Runs a joy with silken twine
....

I learned at almost the same time as the poetry slam that humans can eat violets and that the leaves are high in vitamins A and C. For weeks, the violets were interspersed with the grass, and I added the bright flowers to salads. They tasted mild, faintly sweet, and seemed like a metaphor for the poetry slam: With the seemingly fragile and ephemeral, we are touched and fed.
Posted by Diane at 11:12 AM No comments:

The Little White Horse: Curb your Curiousity (or Not)

Elizabeth Goudge's children's book called The Little White Horse tells the story of a 13-year-old girl who goes with her governess from London to live at her relatives' magical estate in the West Country in 1842. I am reading it in part because a Quaker friend recommended Goudge, in part because this book influenced JK Rowling, and, primarily because, having just submitted my finished Bonhoeffer and women manuscript to the publisher on Thursday, I am ready for a gentle read. 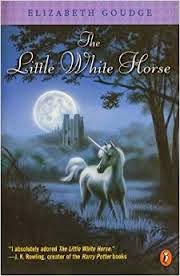 I see the influence of The Little White Horse all over the Harry Potter novels: like The Little White Horse, they evoke a magical, alternative universe. Rowling's fantasy world bites harder and is sharper edged than Goudge's, as is her sense of humor, but her predecessor's fingerprints have left their imprint, especially in teaching the power of scene setting and description. Clearly, Rowling learned from a foremother. I am also finding parallels between Goudge and Frances Hodges Burnett: both comprise part of a female line of descent to Rowling.

In reading about Goudge on Wikipedia, I learned a curious story: an Indian writer plagiarized several of her books in the 1990s, simply changing names, religion and locales to India. The novels, dismissed as sentimental when by an English writer, received high praise (if also comments about veering towards the sentimental) when seen as Indian or post-colonial. This stands as yet another example of the ease of denigrating (or exalting) literature based on external markers, such gender or fashion, and points to the need for all of us to think for ourselves and develop strong internal critical apparatus.

White Horse is domestic fiction in being centered on the home and the village. This puts it squarely in line with the work of writers like Jane Austen, who as Walter Scott noted, moved away from the big bow-wow to books about everyday life. Goudge depicts having a room of one's own as a great good. Maria, the protagonist, arriving at Moonacre, gets her own room for the first time. This represents a move away from the patriarchy embodied by the albeit very feminine (but for that reason patriarchal) governess she has previously roomed with. It's also highly important--and life-giving--that the rooms at Moonacre reflect the characters of the inhabitants. Selfhood is implicitly asserted by being able to be in harmony with one's place and space. This is perhaps exactly what George Santayana denigrates in a New York Times piece (see http://www.nytimes.com/2015/05/17/books/review/is-there-a-double-standard-for-judging-domestic-themes-in-fiction.html?rref=collection%2Fcolumn%2Fbookends&contentCollection=books&action=click&module=NextInCollection&region=Footer&pgtype=article) discussing domestic fiction, but which is so important a first step towards female autonomy. 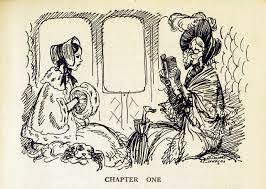 The Little White Horse does, however, promote hierarchy and classism, a belief in bloodlines and the importance of aristocracy that seems alien in today's world and, especially, I imagine, to the American mind. Maria's family is the first family in the village, the grand family, and she thinks of the villagers as "her" people with a sense of ownership. We are constantly reminded that she has special blood in her veins. 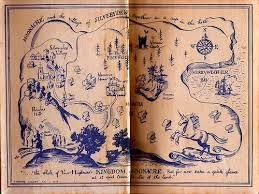 Goudge imposes female boundaries with a repeated  lesson about curbing "feminine curiosity," an evil condemned by no less than God's proxy, the village parson. (Apparently "masculine curiosity" is less objectionable.) He admonishes Maria to replace her eager curiosity with a passive waiting for others to anticipate and initiate their wishes. Bob Dixon, author of Catching them Young: Sex, Race, Class in Children's Fiction, would be frothing at the mouth and rightly so.

The novel is also a fantasy historical, set a century before it was written, which adds another layer of complexity. I am about a third through it, and curious (sorry to say--does the thrust of the narrative work against the moral message?!) about what will happen next.
Posted by Diane at 10:06 AM 4 comments: