Sadly, the recent shooting in Orlando makes an appropriate backdrop for my topic: the debut of new book on Quaker literature and the question of how we can move towards a more robust imagining of peace.

The anthology, Quakers in Literature, will be officially launched this month at the Friends Association for Higher Education Conference in Woodbrooke, England. I would like to praise this book (full disclosure: I have an essay in it) and juxtapose it to my viewing of the series Game of Thrones.

Game of Thrones, though not without its entertainment value, is characterized by cartoonish characters, cartoonish violence and cartoonish plots. Violence and ritual humiliation substitute the sensation of shock for genuine feeling. In this series, a viewer can get a faux emotional jolt or pay-off (of sorts) without a real emotional investment.

The show is set is another time period, presumably very long ago. It's Roman European-esque in feel (and Middle-Eastern-esque)--pre-Christian certainly, but with a medieval overlay. The people are barbaric as a matter of course, and so are constantly chopping each other's heads off (or delving axes into people's brains) and perpetrating other acts of violence.

Recently, a man named the Hound who was left for dead reemerged. He falls in with a wayward wandering group that has decided to renounce violence. Their leader even makes a strong statement about how more killing isn't going to stop the cycle of killing. Lest you think this might open an alternative path in the series, no ... all but the Hound, who happens to be away when it happens, are slaughtered (not that there is the least question this will occur), and the man who made the speech about peace is found dangling, hanged. This is replayed in the next episode too, lest we missed the message: peacemaking leaves you dead. Peace is for losers. Losers, losers, losers. Kill or be killed. Strike first and hard or die.

The message dunned into the audience week after week --as was done in The Sopranos and Breaking Bad and who knows how many other series--demonstrates that the most violent man wins. All religion is a scam or evil, so don't look to that for help. Strong woman are routinely humiliated--for example,  a queen,  Cersei, is subjected to one of the most intense scenes of ritual humiliation I have ever witnessed --as a penance imposed by a priest of some cult, she must walk naked through the streets of her city while being pelted with rotten vegetables and jeered at.

As a Quaker and also as a sane person, I find this constant messaging advocating ultra violence disturbing. Of course, as with all these programs, the producers can coyly say they are depicting something outside of the societal norms of our world.  Naturally, they say they don't condone this behavior. But, as with  The Sopranos and Breaking Bad, everything about the rhetoric of these programs DOES condone it. Real men are validated for being ruthlessly violent. Ruthless violence wins. Compassionate morality is baggage for weaklings and nonentities. Who needs the Nuremburg rallies to whip up the base when you have Game of Thrones?

Therefore, it was refreshing to read an essay by J. Ashley Foster on Virginia Woolf's peace stance and the Spanish Civil War from the Quakers and Literature book--it's long but well worth reading.

According to this essay, Virginia Woolf was involved with Quakers, such as Kathleen Innes, who published through Hogarth Press, (Innes published four books on the League of Nations with Hogarth) and they all advocated for peace. This article cites, of course, Woolf's Three Guineas as a feminist peace essay, but argues that, more fundamentally, "pacifism is one of modernism's idioms." This pacifism is internationalist in nature (rejecting fascist nationalisms). Woolf herself envisioned a fictional "Outsider's Society" in  Three Guineas made up of the daughters of educated men who would work for peace. Foster sees the corollary of this in peace efforts that emerged during the Spanish Civil War.

We remember there was a time when many non-Quaker women, and I think of Eleanor Roosevelt, believed that women had a particular role in promoting constructive peacemaking--building the conditions that would lead to peace that lasted through "justice and the rights of all."  Woolf's aunt, Caroline Stephens, was a feminist Quaker whose pacifism informed Woolf's feminism, and Roger Fry's sister Margery was a Quaker. Quakers published through the same presses and belonged to many of the same political organizations as the Woolfs and other modernists, and the Woolfs sold manuscript pages of Three Guineas to raise money to  aid Spanish Civil War refugees.

It was comforting to me to remember that Woolf, who I often think of primarily as a stylist, engaged in serious peace work and political work during the Spanish Civil War and to review her strong commitment to pacifism and her strong belief in the connection between peace and feminism. I remember too during this period (late 1933-early 1935) Dietrich Bonhoeffer was also in England, dedicated to pacifism and trying to build international coalitions to fight National Socialism, most notably at the Fano conference in 1934. I wonder if the Woolfs and Bonhoeffer ever brushed shoulders, but that's an aside--what I care about is that  intelligent women speak out for peace--and I can't help but wish for our own Outsiders group to push back against shows like Games of Thrones.

I also can't help but think that the male producers of Game of Thrones (I looked up their bios and saw no sign of military experience) are advocating a warrior mentality and articulating a position that validates ruthless slaughter without having an actual experience of war themselves, which makes this program all the more dangerous.

This brings me back to Quakers and Literature. It's no wonder that a culture that leans relentlessly on violence as the only authentic form of power would produce a constant stream of individuals who try to express power through slaughter or that they would be attracted to ISIS as the most ruthless group of all. A question I raise in my essay in Quakers and Literature, called "Quaker Literature: Is there such a thing?" is why Quakers have been sidelined into homespun, nostalgic domesticating fictions when so many serious issues confront us. Is this really a time for escapism? Or do we need to be concentrating more effort on a literature--fiction and non-fictional--that imagines solutions to our problems through a pacifist lens? After all, without an imagination, the people perish. I would argue that a culture that pornographically repeats violent images over and over again has lost its imagination and its mooring. We who look at it outside a perspective of violence--we the Outsiders--perhaps have a responsibility to pick up the work Woolf started and advocate more imaginatively for peace. Where can we start?

May (now June) Memories: How I Came to Austen and Why I still Read her: VI

In this series of guest posts, a meta-diary of sorts, Austen readers recount what brought them to Austen in the first place and reflect on why they keep returning. Nancy Mayer, list owner, Regency scholar, endless fount of patience and Janeite extraordinaire, wrote the post below.

How I came to Jane

I came to  the reading and enjoyment of Jane Austen late in life and long after I was out of graduate school. If she was mentioned in the course on "The History of the Novel,” I don't remember it and certainly I was never required to read any works of hers in school.

My way to Jane Austen was very indirect and not at all like that of the others.

I didn’t connect the movie to a book nor did I know the name Austen.

I read many books, took several courses in literature and poetry but somehow missed reading anything by Jane Austen.  I liked the Victorian poets and the novelists Thackeray and Trollope. I only liked Jane Eyre of the Bronte works.

Then I came across books by Barbara Cartland. Perfect light reading. I particularly liked her Regency romances. I was intrigued by the historical note she included In each book and started  looking up more information on the events she put into a fictional context. 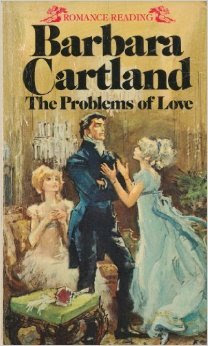 I read all the Regency romances I could find

I discovered contradictions and errors of historical facts in the books so did more research on the English regency period, which lasted from 1811-1820.

Somewhere in my research I came across Jane Austen and Lord Byron, who lived and wrote in that time period. I found other authors and poets and read many of them but kept returning to Jane Austen.

Jane Austen’s letters gave an insight into the lives of women of the period, and her books were much more interesting and easier to read than most of the other who wrote then.

I wanted to discuss her novels with others and found a chapter of JASNA in Atlanta.  Then I found the Austen-L online discussion group.

When the Atlanta chapter of JASNA lost both its meeting place and many members, some friends and I started it up again. I led it for fourteen year. We met once a month. Though we did read one or two novels by Austen’s contemporaries and sometimes discussed the spate of movies which came out, we mainly discussed the Austen novels.

When Austen-L became very acrimonious with flaming Fanny wars, Anne Woodley started Janeites, where people could discuss Austen with some semblance of courtesy.

I have read Austen’s works several times and can still find something new in the books.

I like Persuasion most. I can sympathize more with Fanny Price and even have sympathy for Emma, but Anne’s story is a favorite.
I return to Austen and her novels because there is always something new to learn and the books are enjoyable no matter how often one reads them.

I tend to prefer a traditional interpretation and one that takes in to consideration life in Austen’s day.

I am still greatly interested in the regency period. That is still my prime area of interest and study.
http://www.regencyresearcher.com/pages/marriage.html