Jane Austen: what if she is really angry? 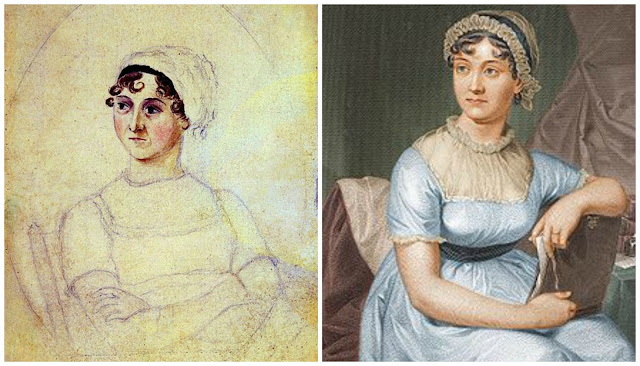 In a college writing class, I showed a multi-ethnic group of students the above portraits of Jane Austen. Jane's sister Cassandra sketched the one to the left during Austen's lifetime; the second is a version of the first portrait concocted in the Victorian era. We studied these portraits in class to try to discern the difference between a first and secondary source--in other words, to discern how a story changes.

This cohort of students had never heard of Jane Austen and hence had no preconceived notion of her. When I showed them Cassandra's portrait on the left and asked them what they saw, where I perceived repose and resignation, and perhaps some defensiveness in the crossed arms or world weariness in the eyes looking away, they saw sheer anger. One student envisioned her glaring at her children with rage. "She thinking she gonna get out the belt to beat that kid," one said.

Could the pursed, straight-lipped Jane with the folded arms and the sang froid gaze really be angry? Could that be? Is she actually sending a death ray gaze toward someone? If so, who? Who has her so annoyed, if she is? I remember reading that one of her nieces, perhaps Caroline, was dismayed at the portrait. Did she too see anger?

If Jane Austen really is angry, which I can't quite see, though I could when my students were expressing themselves about her, I like to think the portrait contained a secret message the two sister's shared, a dark joke of sorts. It's possible, for we know from the juvenilia that the young Cassandra had a sense of humor the older woman seemed to lose. If only we could know the real story.

I take my students' experience of Austen as angry seriously, because, they, unlike me, don't look with the expectation of what they are supposed to see. And given the anger many critics find beneath the surface of Austen's prose--she was a satirist after all--the kind of anger WD Harding first uncovered in his "Regulated Hatred," my students' reading of the portrait is not outside of the range of the possible. Do you think Austen is angry in this portrait?
Posted by Diane at 6:32 PM 2 comments: