The pandemic inspired me to clean out a cupboard. I found old cooking pamphlets there ranging  from 1934 to 1959, given to me by a generous friend.  These pamphlets were produced by companies trying to sell their food products.

1934's The Latest Cake Secrets, was released by the Consumer Service Department of General Foods Corporation to promote Swans Down, the "original cake flour" and "the most popular and successful cake flour used in the land."  The company is still in business: Swans Down can be purchased on Amazon.


As with all these pamphlets, The Latest Cake Secrets is an advice books as much as a cookbook. Here, we learn to "trust good rules--don't trust luck."  We find out that all the pamphlet's recipes have been tested and retested, and that  "the perfect cakes is a proud work of art". All of the cakes and pies in this 1934 pamphlet are shown shown sliced, as we see on the cover photo.

1945's Recipes for Good Eating produced by Proctor and Gamble to sell Crisco puts an emphasis on home economics as a serious and scientific endeavor. We learn that:


The Crisco Kitchen is a practical sort of kitchen.  It has all the latest equipment and is staffed by well-trained Home Economists. But these women are more than scientific experts. They themselves keep house and understand the problems of preparing home cooked meals.


I was fascinated with the meal suggestion of fried cold cuts in Recipes for Good Eating, from a recipe we might blanche over today, called Fried Meat Slices: "Slice luncheon meat, boiled tongue or bologna. Dredge slices with flour or coat with egg and crumbs. Fry in hot Crisco in skillet until brown on both sides."


In both 1945's  Favorite Recipes for Country Kitchens and Recipes for Good Eating we are presented with an idealized domestic world and photos that show little girls being indoctrinated  into a culture of female domesticity. This is an entirely white, northern European society, though undoubtedly girls of color learned cooking skills from older female relatives as well. In these books talk of industrial kitchens and scientific techniques are juxtaposed with homey images of daughters learning literally at their mother's apron strings.

In a web post called "The Strange, Secret History of Betty Crocker" by Sam Worley, (https://www.epicurious.com/expert-advice/betty-crocker-history-100-greatest-home-cooks-in-america-article)  I learned that Majorie Child Husted was the inventor of--and seemingly model for-- Betty Crocker. One of the disillusionments of my teenage life (since my brother and I had spent many an afternoon making recipes from the Betty Crocker Boys and Girls Cookbook) was learning that Betty Crocker was not a real person, but a corporate creation. However, it was only in the last few weeks that I became interested in who was behind her: who, in essence she might be.


Like so many women of her era, such as Brownie Mae Humphrey Wise, who invented the Tupperware Party, Husted was largely responsible for the rise in her company's fortunes, though she was only paid a fraction of what the company's top salesman earned. (Wise, likewise, was unceremoniously fired as a liability for being a woman when Earl Tupper put the Tupperware company on the market.)


It is very interesting to me to look back now and realize how concerned I was about the welfare of women as homemakers and their feelings of self-respect. Women needed a champion. Here were millions of them staying at home alone, doing a job with children, cooking, cleaning on minimal budgets—the whole depressing mess of it. They needed someone to remind them they had value.

Husted, who would have been in her late 60s in 1959, and retired at the time, seems nevertheless to be the voice behind Betty Crocker's Guide to Easy Entertaining. I was shocked by this guide, with its first edition coming out in 1959, as it seemed utterly of another era--though it strains at the same time to try to adapt to "new" realities. 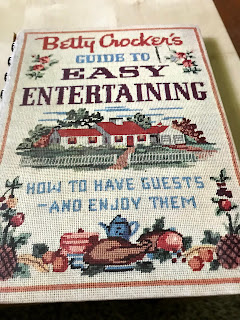 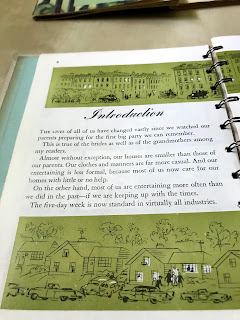 These "new" realities include, as outlined on the page above,"vastly" changed lives. Changes included smaller houses, as illustrated in the pictures above and below the Introduction, in which small single family homes have replaced the large townhouses above. Another change is the new world of caring for "our homes with little or no help," which has replaced the world of servants. (This is interesting difference from the earlier pamphlets, which assume no help at all.)

We also learn that "the five-day week is now standard in virtually all industries. Men have more time for fun and friends. So have women, even though so many are holding jobs as well as running their homes."

Much of this book's advice reflects the idealization that is standard, showing a picture of a domestic world as it might perfectly be, not as it is. It is hard to imagine too many women in 1959 being part of a social world that ever included a live-in maid. However, an ideal --or flattering portrait--might be to depict readers as coming from an elite social set that is brightly adapting to new, less luxurious realities. The true story is that most were  escaping joyfully to Levittown suburbs from dark, roach-infested, smelly, overcrowded urban apartments. So it is not hard to imagine this book pieced together from an earlier, more formal and elite guide, now pitched with dim awareness at a suburban audience.

In any case, we learn that it is acceptable for the modern hostess to remove dinner plates "two by two:" she is, after all, "not a maid," which means she does not have to remove plates one at a time from the right.

Such statements that disavow having to remove plates one at time are perplexing. Do they represent a longing for a return to a time when (white) women will have maids again and need this tidbit of information? More likely, this represents a quick update of an older text that had become archaic.

Finally, in a complete switch from today, in the section "What do you do about guests with special diet problems?" some of the burden is put on the guest with special needs. We learn:

"It is not kind to ask a hostess, who has her hands fulls anyway, to prepare an entirely separate meal for one. It is even more unkind to refuse the party dishes she has gone to such trouble to prepare. In this case, it is better to say, "We are not dining out at all while Bob is on a limited diet, but we'd love to join you anytime you're planning an after-dinner party."

This gives the hostess a chance to say, "We'll miss you--put will you join us after dinner?" ... or ... "We'll plan an evening together soon."


This quote, in which a guest is extorted to be thoughtful, brought me back to an article I read in a glossy Town and Country magazine in 2007, in which a renowned south of France hostess declared she had put her foot down after being confronted with too many special food needs: eat what I make or bring your own, she said in a blanket statement to all guests.

While I think it is sensitive to care for guests needs--and Betty Crocker does, too, as the anecdote before this one illustrates (in that, a hostess is relieved to learn of a guest's onion allergy so she can accommodate it)--I have also been thinking about this advice in light of mask wearing and Covid. The refusal to wear masks, though they are primarily helpful to protect others, especially the vulnerable, seems to be a symptom of a society that has veered too far in the direction of rampant selfishness. While much in these books seems archaic, Betty Crocker's desire that hostesses be considerate of their guests' needs and guests sensitive to their hostesses' needs seems the  kind of  baseline mutual courtesy needed for a civilized society to thrive.