A month ago, Roger and Nick and I were in Costa Rica.

Nick was going there to do a two-week project, and we thought we should go with him--and have a vacation too :). My summer class was cancelled for the first time in six years, so I had more time to travel mid-summer. 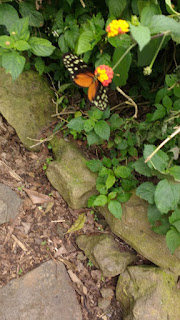 Butterfly at a restaurant amid gardens


We flew into San Jose, the capital, but our first destination was Monteverde, at the top of a mountain. It was a long bus ride up, slowed down by a dirt road the last 20 miles or so.

When the bus dropped us off at the end of the narrow drive leading up to our hosts' house, we were glad we had come along with Nick: it was pitch dark and as we were standing there uncertainly, a storm of Frankenstein proportions hit: thunder, bolts of lightning, driving rain pouring down as we trudged we knew not exactly where. Nobody would want to arrive in a strange place in another country all alone to this kind of weather.

We made it to our kind hosts the Castillos and from there on, had a very good time.

Montverde was essentially started by Quakers who settled there to farm in 1949. Costa Rica was and is a country without an army, so young Quaker men who were being jailed in the U.S. for being conscientious objectors could literally live in peace in Costa Rica. In the 1950s, they cleared cloud forest in order to dairy farm and start a cheese factory. In the 1960s, as scientists worried about climate change and species extinction began to descend on the cloud forest, the Quakers turned their energies to cloud forest preservation and ecological concerns. However, the cheese (and ice cream) factory is still there, and one of our highlights was getting the local ice cream.


Today, the various Monteverde cloud forests are international tourist destinations and tourism drives the local economy. We saw and heard tourists from all over Europe: France, England, Germany and more. Monteverde has many coffeeshops and restaurants because of the tourists.


Touring the cloudforest was a spiritual experience. Our guide, who was excellent, didn't feel compelled to talk non-stop, so we were able to experience the profound stillness and peace of the forest. It was a remarkable experience. Unlike Barnesville, where the birds often create a cacophony of sound with their many raucous songs and loud cries, we at most heard the muted song of a bird in the distance. The forest was hushed and still.

As Quakers, it was a treat for us to visit the Monteverde Quaker school and meeting, and to have lunch at a small local outdoor restaurant run by Rockwells--relatives of Barnesville Quaker Rockwells.


The food in Costa Rica was wonderful--all fresh and home cooked. We enjoyed the "tipico" meal of black beans, rice, fried plantains and salad. The internet was quite good as well.

We learned that despite pressure from the business interests in San Jose who have put up hotels in Monteverde, the government sees no need to pave the last 20 miles of road up the mountain: from their point of view, there is a health clinic and a hospital at the top of the mountain, so no human need for rushing up the road. That kind of thinking was stunning to me, so indoctrinated am I into the idea that everything must be subordinated to business needs. One of the pleasures of international travel is, of course,  being exposed to different ideas and ways of life.

After a few days in Monteverde, Roger and I left Nick and headed down the mountain in the public bus to the Pacific coast. The three-hour ride cost each of us about $4 versus the $50 per person for the shuttle bus. The ride was pleasant and we watched as people talked to each other, children in school uniforms headed for the classroom, and people got on and off with shopping.


The ferry ride to the island where our tiny Mal Pais beach house was located was lovely. The public bus ride to the beach was not too lovely--very long and very hot--but very cheap.

We loved our beach house and the neighborhood feeling of our locale. We found a wonderful open air restaurant right on the beach, very reasonably priced. We also enjoyed swimming in the very warm ocean water. One day we bought fresh grouper right off the boat.

Costa Rica is a lovely, friendly, low-key place. Because it is so attuned to tourism, people there anticipated our needs before we knew what they were, which was helpful to us. At the same time, little to none of our trip felt conventionally "touristy."

While Barnesville is hardly the epitome of consumerist, it was still a pleasure to stay for some days in a country even less consumer oriented. Costa Rica is dedicated to becoming energy self-sufficient and has put aside a large amount of its land as state park. Health care and education are available to all citizens--even higher education is free or very low cost to those who qualify. There is much the U.S. can learn from this tiny country.
Posted by Diane at 8:36 AM 15 comments: