Give sorrow words. The grief that does not speak
Whispers the o'erfraught heart and bids it break.

A cat of great self possession
A people lover
A sweet, gentle and lovable creature
A finicky eater: truly he should be on the cat gastronome honor roll
A great hunter and mouser
The king of our back yard in Maryland who kept the squirrels at bay. A cat who retired in old age with quiet dignity and liked to sit on the windowsill and look at the bird, the snow, the other animals.

The young Andre was found on the streets, taken to a shelter, and from there we adopted him in February 2002.  He was two or three years old.

The most terrified I ever saw him was when we first let him out of his cat carrier and onto to Sophie's bed. Five strangers surrounded him, and he was in an utterly strange place. He cried and became so frightened that he wet the bed.

He soon settled in. He was well loved, and he became confident. He made our house and yard his own. He chased away the squirrels who had thought they owned our back deck. The woodsy yard became his undisputed kingdom, and he the unchallenged monarch. We did not worry about him being hurt: our yard was off the end of a quiet cul-de-sac and from there, down a long driveway.

Andre was an expert hunter and mouser. He did kill a few birds in his time--we would find the tell-tale scatterings of feathers. We tried to put collars on him that would alert the birds, but in those days it was the work of minutes for him to remove them.  We thought of keeping him in, but he was a cat who adored the great outdoors. He never once, that I remember, all the time we lived in Maryland, ever need to use the litter box.

From the start, he was a sweet, social cat. He loved and was curious about people.

He always treated his food with utmost seriousness, perhaps because of his experiences on the street.

In those salad days, he was a feisty fighter: getting him into a cat carrier was the work of two adults in mortal combat against a single cat.

At my father's funeral luncheon at our house, he jumped up and caught a roll of turkey from a cold cut platter on the dining room table. I was amazed at his audacity--and his leaping skills.

By the time we moved to Ohio he was entering middle age. He never took to the yard here as he did in Maryland, and he was displeased that this house only had doors on one side. Here, in a rural area, the number of predators may have been too much for him--or perhaps he was simply getting older. Life was never quite the same for him after we moved.

As time went on, he  preferred to be indoors, often watching nature from one of the three picture windows in our living room. He would in the early days growl at the birds--and then that stopped.

As he began to do less, he became sweeter. He liked to be around us.  He would let me carry him in my arms on walks outside. Inside, he became a lap cat, liking to sleep curled on a lap or next to a person. He liked to sun himself on the front porch. He became ever more particular about his food, and as he became skinnier, we became ever more accommodating. By the end, we were traveling hours to Wegman's for his preferred cat food (which no one would deliver) and feeding him ham and fish.

He seemed to become wiser, almost a contemplative or a sage in his old age, far different from his younger feisty self. He seemed at peace. He remained, however, persistent and tenacious, and overcame several bouts of illness that might have killed a lesser cat. He had dignity and was a credit to the cat kingdom: always true to himself, utterly at one with his own nature.


In his last two weeks, he often perched on the narrow windowsill behind the sofa to look out the window. I now wonder what he was thinking, and if he knew he was drinking in his last views of his beloved nature.

I understood he was failing when, about six days before he died, he got tangled in the sheer curtains trying to leave the windowsill, and I had to extricate him. In that last week, he could only climb on our bed by jumping high enough to grab the blankets with his front claws and pulling himself up with the muscle power in his front legs--with our help.Yet he didn't give up. Four days before he died, while we were out, he tried to jump on the kitchen table, caught the tablecloth and fell back, pulling  down glasses which broke all around him. It must have been frightening for him. After that, he began to die. We made an appointment with the vet for a quality of life assessment. I had to feed him by hand, and then he stopped eating. He would lap water if I brought his bowl to him, and on his last day, stopped drinking. And that was that: he died a day before his vet appointment.

We buried him yesterday. What was his body without the soul? It seemed so empty--like a fur with nothing inside, the white paws dangling from the towel we had wrapped him in.

Andre was at once both Blake's tyger and Blake's lamb. He had all the beauty of the tyger, and to the smaller animals, was a fearsome predator. And yet he could be all sweetness and love, like a lamb. One could wish the cat to be all lamb, but that is not the way the world is.


Blake never wrote a poem about a cat, but Christopher Smart in "Jubilate Agno: My Cat Jeoffry" understood the dual nature of these creatures. The words "jubilate agno" mean "rejoice in the lamb [of God]"--and Smart rejoices in the lamb in the cat. But he also calls Jeoffry "of the tribe of Tiger." Some of Smart's words about Jeoffry could well describe Andre--and probably all other cats:

For he is tenacious of his point.

For there is nothing sweeter than his peace when at rest. 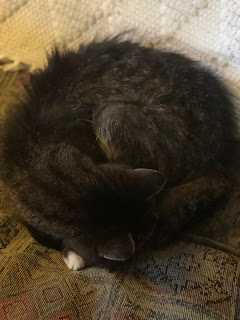 For there is nothing brisker than his life when in motion.
For he is of the Lord's poor ...

For God has blessed him in the variety of his movements.
For, tho he cannot fly, he is an excellent clamberer.
For his motions upon the face of the earth are more than any other quadruped. ...