Modern feminism seems to me to have lost its bearings. How do we bring it back?

I recently read a document called "Xenofeminism: A Politics for Alienation" by a collective of six women who call themselves Laboria Cubonik. As is typical of how my mind works, I immediately began calling it "The Xenofeminist Manifesto"--and it is a manifesto.

Xeno means "foreign," and the essay calls for a foreign or "alien" feminism.  It emphasizes three ideas: technomaterialism, the idea that we can use technology to make life better for average people; anti-naturalism (a rejection of nature); and gender abolition, which the essay states doesn't mean that gender doesn't exist or that we should give up gendered traits, but that these traits shouldn't matter. Gender abolition also includes a call for an end to racism.

The manifesto, as I will call it, is highly abstract. This, presumably, is because it is trying to get to the core of its issues and shed "cruft." "Cruft" was one of the many words in the essay I had to look up. Cruft means "anything that is left over, redundant and getting in the way. ... meant in the sense of 'detritus, that which needs to be swept up and thrown out.'"

The "XF" writers speak of cyberspace as filled with the "noisy clutter of commodified cruft." I appreciate the alliterative "c" words in that phrase, but also note that cruft is assigned, both in the definition and the essay, a negative connotation--and the word itself sounds unpleasant.


I am working on a writing project on what might be called "cruft"--on marginalized single women who were considered unneeded. Many were erased and have largely disappeared from history. These women were called redundant and were literally often swept up and tossed, at least in England, to the colonies. Shining a light on these women who did not "fit" to show how they did fit or could have fit or were punished or erased for not fitting the perceived "correct" way is at the heart of feminism and humane living. A humane society has to be built on stories that are as true as we can make them, and including these women is part of that truth.

As I was reading the manifesto, written, understandably,  with passion and anger despite its emphasis on "rational" feminism, Virginia Woolf popped to mind, particularly her two feminist essays, A Room of One's Own and Three Guineas. They occurred to me as representing the opposite of "Xenofeminism:" an opposite aesthetic and an opposite approach to (possibly) similar perceptions of the need for gender emancipation, social justice, and anti-consumerism. Both the Xenofeminists and Woolf seem to be in pursuit the same goal (I think): a humane social order, though I do have profound doubts about XF methods.

If the Xenofeminists are concerned with excising the cruft, cruft is the core of Woolf's business--and at risk of sounding Derridean, I would argue that cruft--that which is considered "redundant and getting in the way"-- is central to a humane literature and a humane society.

One of my problems with the manifesto is that it seems to me difficult to build a humane society on the basis of a type of essay so abstract. It is also inaccessible to the average person, full of an insider jargon that the ordinary reader simply is not going to understand. Words I had to look up included, beyond cruft and xeno, morcellation, memetics, hyperstition, and negentropic. In using such words, the essay seemed to me to be replicating the corporate model they dislike: offloading the work to the consumer. The manifesto may be brief and cruftless, but is so by forcing the reader to do the extra footwork of deciphering meaning. Is a humane society not built, in part, on making idea accessible to ordinary people: not dumbing them down, but presenting them in a graspable way?  This is what Orwell does, and what Woolf does to. There is a reason "a room of one's own," a phrase anyone can understand, is part of the modern vocabulary.

Some have complained to me, however,  about the meandering quality of A Room of One's Own: why is it so longwinded, what is the point, they ask? In other words, why so much cruft? And arguably, Woolf could have edited it without loosing her point. But it is in the cruft that one comes to see what gender inequality looks like  as it is lived in the mundane particulars of everyday life: it is lamb and good wine at a men's college versus mutton (or in U.S/ terms, meatloaf) and water at the women's college. It is  having access to a good library or being barred from it. In these details  a life is made. These are the details that  we observe exactly only we take the time and space to meander. In these details a stunningly persuasive argument is built. 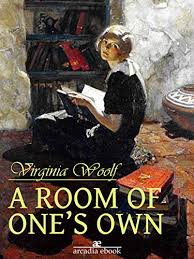 The Xenofeminists would no doubt argue, and to some extent, rightly, that it would take writing books to lay out the particulars of their agenda, but is that so? Could this not also be done in the "tweetable paragraph" format of the manifesto? A story, I understand, can be told compellingly in 56 words. And if it takes more time, isn't important to find that time? If I understand what is behind the XF abstraction, it is, in part, allowing people leisure time: the kind of slow time that allows people not to rely on tweets.
We can't build a humane society without a humane literature (in which I include filmed media), and a humane literature, I argue, rests on the particular and the domestic. XF rejects the domestic--and this sense has much in common with the Leninism of the early Russian Revolutionary period, but how can we expect to embrace a reinvented domesticity if we don't know what this is like? Leninism at least tried to articulate what the new domesticity would be.

My overall problem is that I don't know what FX's reinvented social structure looks like, and I fear that the cruft they will discard is exactly the cruft that makes life worth living.  What do they mean when they say they want "superior forms of corruption?" Or as Ellen Moody asks, what risks, exactly, do they want us to take?

Ultimately, I am uncomfortable with the totalizing abstractions of the XF essay. I want to know what all of this looks, feels, sounds and tastes like. I think of Stalin's dictum: "The death of one person is a tragedy, the death of million people is a statistic." Give us, XFers, the life one person in the remade universe.