Agatha Christie and Virginia Woolf near contemporaries, came from the same social class: upper middle and well-heeled, but not aristocratic. Woolf was born in 1882, and Christie in 1890, both into Victorian households replete with servants and a strong class consciousness. In both cases, their parents entertained none other than Henry James. Leslie Stephen, Woolf's father, would have known him from being at the center of the London literati, Christie's father because both came from wealthy New York society. Both women writers rose to literary prominence in the 1920s, Christie as the writer of popular mysteries and Woolf as the author of high-quality experimental fiction. 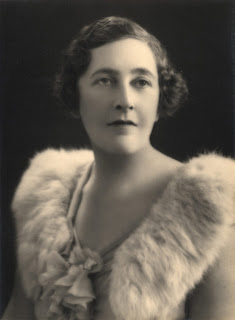 It's hard to imagine that they did not know of each other and read each other's prose, though I know of no documentation of either. It seems likely too they would have met, if only tangentially, as both travelled in roughly the same social circles. One can't help but wonder what they thought of each other--and wonder if the other's fiction had an affinity. Woolf advocates reading broadly and reading popular fiction. Christie was a reader and often frustrated at the formulaic constraints of her mystery genre. Like Woolf, she stretched the confines of her form.

Clues that I have gather so far that Woolf and Christie might have rubbed shoulders are scant, but what of this?

Sir Harold Nicolson, Vita Sackville-West's husband reviewed Christie's The Mysterious Mr. Quin in the Daily Express in April of 1930. He wrote that


"Mr. Quin and Mr. Satterthwaite are, to me, new characters, and I should like much more of them. Mrs. Christie always writes intelligently, and I enjoyed these stories as much as any she has written."

Clearly Nicolson was aware of and reading Christie's work. Did the Nicolsons and Christie meet? They were both part of the same country house set, and it is not a stretch to think of them showing up as thinly disguised characters  in a Christie mystery.

More strikingly, Christie and Woolf shared some similarities in thought. Were these ideas simply in the air in the 1920s? Or is it a matter of two writers obsessed with the past thinking along the same lines?

“I can only note that the past is beautiful because one never realizes an emption about the past at the time. It expands later, & thus we don’t have complete emotions about the present, only about the past.”

Christie conveys a similar sentiment in a story in  The Mysterious Mr. Quin called  "At the Bells and Motley,” first published in November 1925 in The Grand Magazine. In discussing a mystery, the elusive Harley Quin and protagonist Satterthwaite have a conversation in a small, dim London restaurant about a disappearance years before. Quin proposes that they reject Satterthwaite’s idea that they “imagine themselves back on that fatal day.” Quin responds that they should pretend the disappearance took place:

“a hundred years ago. That we, in the twenty-first century, are looking back."
You are a strange man,” said Mr. Satterhwaite slowly. “You believe in the past, not the present. Why?”
“You used, not long ago,  the word atmosphere. There is no atmosphere in the present.”
“True … The present is apt to be—parochial.”

Both writers locate the past as a place where emotion or atmosphere can be best understood--if we can look back on the past from a distant vantage point.

This is perhaps not an astonishing idea, but it is interesting that both writers were consciously exploring it at the same time, suggesting that their work has more commonalities than we might imagine.