May Memories: First Encounters with Jane Austen and why we still read her: Part III

In this series of guest post, a meta-diary of sorts, Austen readers recount what brought them to Austen in the first place and why they keep returning. The following is by Elaine Pigeon.

Although I’d certainly heard of Jane Austen, I didn’t read her when I was growing up. I was turned-off by the prim and proper female novels my British grandmother tried to get me to read, which is what I thought Austen was about. I preferred the adventures of Nancy Drew. Later, when I was in my twenties, I read the diaries of Virginia Woolf and Anais Nin for insight and inspiration. Having attended art school sporadically in my late teens, I was enthralled by the Bloomsbury group.

My attitude toward Austen changed when her novels started showing up as costume dramas on Masterpiece Theatre in the mid-1990s. I remember nearly falling off my seat while watching Pride and Prejudice. As Elizabeth Bennet drives by the Pemberley estate, her eyes suddenly light up and her attitude toward Darcy undergoes an instant transformation. I thought this must have been the filmmaker’s interpretation, but low and behold, I soon learned that Austen does this in the novel. My interest was piqued, but not enough to start reading her; I opted for the films.

As a graduate student, I had lots of other books to read. In fact, I don’t recall seeing Austen listed on any grad courses! Hopefully, that has changed. In any case, I began studying Henry James and spent about two years reading his writings and then wrote my dissertation on a few of his major novels. Eventually, I came to see how much he drew on Austen. In The Portrait of a Lady, when Isabel Archer arrives at Gardencourt, she declares, “It’s just like a book!” This is an allusion to Northanger Abbey, echoing Catherine Morland’s words when Henry Tilney describes the Abbey to her: “Oh! Mr Tilney, how frightful! – This is just like a book!” Following Austen’s example, James illustrates how his idealistic Isabel must come to terms with reality.

Northanger Abbey has become one of my favourite Austen novels, possibly because it’s the one I know best. I have had the pleasure of teaching it in a course on eighteenth and nineteenth century writing by women a number of times, and it never disappoints: every time I read it I find more and more to admire. On my syllabus, it follows after our reading of Francis Burney’s epistolary novel Evelina and the first few chapters of Mary Wollstonecraft’s A Vindication of the Rights of Woman. Northanger Abbey makes a wonderful contrast to Evelina; Austen’s prose is so clear and concise -- in a word, so modern. I also have the students consider Catherine’s friend Isabella Thorpe and her pursuit of Captain Tilney as an illustration of the analogy Wollstonecraft makes between fashionable young women and men in the military. Both are excessively vain and superficial in their values. I also present the novel as an example of metafiction, in that Austen incorporates a critique of the novel, especially Gothic novels, into her text. Finally, I make sure to draw attention to that fact that Catherine was not entirely wrong in her impression of Henry’s father, General Tilney. He does prove to be a villain when he discovers that Catherine is not rich and orders her to leave the Abbey. In terms of the actual text, I prefer the Broadview edition of the novel, edited by Claire Grogan. She provides an excellent introduction and very informative footnotes. 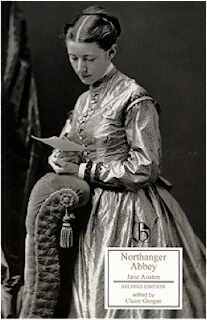 Of course, James learned other things from Austen besides her realism. I am now convinced that reading Austen provided him with much insight into the efficacy of irony and ambiguity, and how craftily they can be deployed. As a queer male, James could not write about his sexual preference directly. Just think of what they did to Oscar Wilde! Instead, James learned how to create a very subtle queer subtext, not necessarily perceptible to all readers. Moreover, one could not actually prove that the subtext was there, that would have been too risky. As a reader, one could, however, draw it out through the allusions and thereby produce an alternate text.

I've since read Mansfield Park and Emma, but much preferred the former. While I identified intensely with the much maligned Fanny Price, I still dislike the haughty and narrow-minded Emma, especially as incarnated by Gwyneth Paltrow. As I live in Montreal, I was fortunate in that I was able to attend the Austen AGM conference here in 2014 and listen to some excellent presentations on Mansfield Park in relation to the slave trade, which informs the background of the novel. Patricia Rozema drew on this for her excellent 1999 film adaptation. 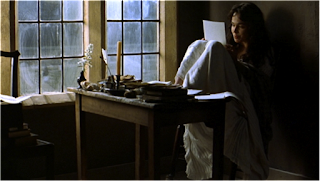 Next month, I will finally be reading Persuasion with a small group. There is also a new Austen film that has just come out, Love and Friendship, based on her early work, so I can now start at the beginning and work my way through her novels one more time. Austen is a writer who clearly merits rereading. I also think there is still much than can be said about Austen’s influence on James. Now that would be another interesting project!

Elaine Pigeon has a BFA in Film Studies and for her MA focused on the construction of gender in 18th-century literature. She received her Ph.D. in English Studies from the Université de Montréal. Her dissertation, Queer Impressions: Henry James’s Art of Fiction, was published by Routledge in 2005; the paperback edition in 2011. She currently teaches courses on 18th & 19th Century Writing by Women, Modern Fiction, and the American Novel as well as Children’s Literature in the English Department of Concordia University. Her interests include women’s writing, the gothic, modernism, cultural studies and film. She also blogs at pigeonfiles.wordpress.com.
Posted by Diane at 9:25 PM