I finished Diana Birchall's The Bride of Northanger, a sequel to Austen's Northanger Abbey, and find myself in the perplexing position of hoping to discuss it without giving away the plot points. Onward we plunge. 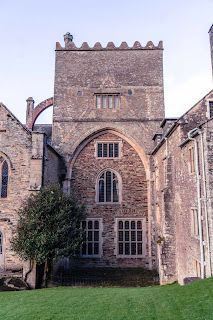 We were left at the end of the last post with a possible ghost in the form of the Grey Lady seen floating around the abbey, as well as a possibly poisoned General Tilney. The plot only gets more exciting with a pile up of events that keep the pages turning. We are also offered reunions with familiar characters from Northanger Abbey, including the brother and sister duo we love to hate, John and Isabella Thorpe. Needless to say, they add greatly to the excitement that unfolds in the novel's latter section.

But The Bride of Northanger is also lovely in its quiet moments. Despite all the suitably dramatic events going on at the abbey, Diana takes the time to depict the happy marriage of Henry and Catherine amid the peaceful setting of Woodston, Henry's--and now Catherine's-- parsonage home. Catherine's little sister Sarah comes to visit and admires the "lovely long windows" and the view of the "apple-trees ripening so beautifully." We learn from the narrator that:

the summer weather continued golden and delightful, with the sweet strawberries reddening, and Catherine was in the garden more than half the day, pruning plants, and learning to tell which were weeds.


Clearly, Catherine has more fortitude and realism that Mrs. Elton, who couldn't last half an hour in the Donwell Abbey strawberry patch, though, in Mrs. Elton's defense, she picked there on an exceptionally hot day. Woodston, in any case, is an Edenic contrast to the increasingly troubled Northanger Abbey, though notably in the end, perhaps like Adam and Eve, Henry and Catherine put their shoulders to the grindstone and decide to leave their paradise.

But that is not until many adventures have occurred, including, suitably, a trip to Bath.

The novel revels in Gothic elements Austen clearly enjoyed in her own novel reading, though she also parodied them. There is an edge of gentle parody in this novel too, even while the story is told in a way that fully satisfies the reader's desire for mystery archetypes--a desire that Austen thwarts. I enjoyed this book and can't help but imagine that others will too.

Email ThisBlogThis!Share to TwitterShare to FacebookShare to Pinterest
Labels: Birchall, Bride of Northanger