Journal of a Plague Year: Best Non-fiction read in 2020

While 2020 was thin on novels for me, it was a rich year for non-fiction reading, making it difficult to pick out only a few books.

However, these were standouts:

Bob Blaisdell Creating Anna Karenina:  I found Blaisdell's granular approach to Tolstoy's creation of Anna Karenina utterly riveting: I could scarcely put this book down. If I did not agree with all of his interpretations of Anna Karenina and thought he cast Tolstoy's long-suffering wife in a slightly unflattering light, this is a gripping book and a remarkable achievement. I reread Anna Karenina several years ago, and found it extraordinary, but I had never been especially drawn to Tolstoy. Now, however, I feel I know him in a new way--and have a new understanding how the novel's depiction of sophistication appealed to early readers. Questions linger: how can the man who brutally raped his frightened bride in a train car be reconciled with the person so humanely concerned with writing a primer to expand literacy to the Russian peasants? Tolstoy comes across as a mixed bag of entitled aristocrat and emotional lover of his wife, family, and the common man--and definitely someone who didn't want to write the masterpiece that obsessed and repelled him for four years--and that he finished, he claimed, solely for the money it would bring. 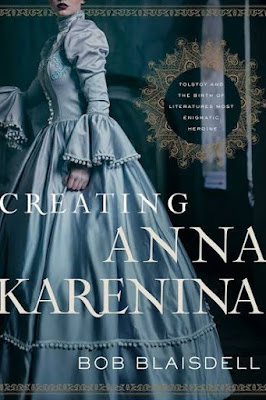 Elizabeth Sandifer, NeoReaction: A Basilisk: This take down of the alt-right is a dense read, and I struggled in an uphill climb before I began racing across its pages in gamboling leaps and bounds of enthusiasm. (Now, there's a sentence!) Scholar Sandifer, transgendered from Philip to Elizabeth, has a Phd in English literature, a background in gaming culture and a love of science fiction, making her as comfortable in Paradise Lost as Call of Duty. She is a Marxian transplant from England to the United States and has a probing, intelligent, and fearless mind. She does not write to pander to an audience. In one paragraph, she will offer  cogent insight into Stanley Fish's Surprised by Sin:

Satan argues that knowledge of Good and Evil will make doing Good easier, and that this knowledge is how God’s goodness is attained, such that defiance of God is actually a means of drawing closer to him. It’s obviously a flawed argument—that’s Milton’s point after all. But it’s got a compelling move at its heart, which is the way in which it uses the desire for holiness to create sin. 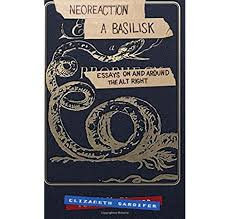 In another paragraph, she will designate certain people "fucking idiots"  or call a disingenuous argument a "dick move." She brings Paradise Lost into the modern idiom:

Satan opens by negging Eve, accusing her of looking at him “with disdain, Displeas’d that I approach thee thus, and gaze Insatiate, I thus single, nor have feard Thy awful brow,” which may be the earliest instance of telling someone they have resting bitch face.

Above all, Sandifer is done with stupidity, which she locates as the defining trait of the alt-right:

the key realization about the alt-right—one that’s been implicit through much of this book, but is worth making explicit as we come to a close: they’re stupid. I do not suggest this to diminish their horror. Far from it: the essential horror of the abyss is stupidity. That’s why it’s an abyss. The unique and exquisite danger of stupidity is that by its nature, it is beyond reason. There is nothing that can be said to it, because by definition it wouldn’t understand. It is an ur-basilisk—the one terrifying possibility that haunts every single argument that has ever been made. It is a move without response, playing by no rules other than its own, which do not generally include any obligation towards consistency. It is, in its way, the only approach that can never lose an argument. And in the alt-right and its affiliates we have one of the most staggeringly vast nexuses of raw stupidity the world has ever crafted. To be clear, my contention is not merely that the alt-right is stupid, nor even that its individual adherents are. It is and they are, but the problem is more fundamental: the alt-right is stupidity. It’s the elemental particle of which every part is comprised. To engage in alt-right thinking is to turn one’s self into a vacuous skinsuit animated by raw stupidity. There is literally not a single shred of non-stupidity in the entire thing.

Is the above insightful or a mere ranting reprisal of what we already know? I would  say insightful. Sandifer does not just, as many of us might, state this opinion as an a priori, as a self evident starting point. Instead, she has spent hundreds of pages illustrating and dissecting with surgical precision, with logic, and with a startlingly humane clarity the stupidity she now condemns. She, of all people, has a right to her impassioned summation.

I could go on almost endlessly about this book. It's written with Orwellian anger and intelligence, pulls no punches, and is especially strong in its evisceration of the Austrian School of Economics. As I been thinking recently about how we understand time, I will include a quote from Basilisk about time:

The abstraction of time, enforced on humanity by the rule of capitalist production, is of course one of Marx’s major complaints. For the Austrians [monetary school] it is the basis of the rewards reaped by promethean entrepreneurs for their virtuous deferrals. ... To quote the monster [Marx, as Sandifer ironically characterizes the Austrian School seeing him] directly: “Milton produced Paradise Lost in the way that a silkworm produces silk, as the expression of his own nature.” Marx would like all labour to be like that, and sees no fundamental reason why it shouldn’t. For Marx, that would be humanity returning to nature. In nature, time would just be the playground.

I imagine much of the response to this book would be "I don't get it," along with a discomfort over her transgressive boundary breaking. I have the idea I will try to blog about the book for those reasons--we shall see.

Francesca Wade's Square Haunting: Five Lives in London Between the War.  This is a book I love from early this year, before Covid struck. In it Wade focuses on literary and scholarly women who lived in London's Mecklenburgh Square between  World War I and World War II: H.D., Dorothy Sayers, Eileen Power, Jane Harrison, and Virginia Woolf. I have blogged about this book three times already, so won't say much more. I have read some vitriolic pushback against it, because Wade shows these women in a progressive light, especially Power, Harrison, and Woolf, and that makes some people uncomfortable. Woolf is clearly a radical, as Wade shows her to be, not an effete elitist. Woolf's radicalism is an insight Erich Auerbach arrived at in the 1940s in his Mimesis--and Woolf, ironically, disturbed him as ushering in the rule of the mob. Though we might, on the contrary, welcome rather than fear her democratizing impulses, he understood her as many to this day don't.

Wade, quite consciously, only focuses on a sliver of the lives she follows, catching these women as they intersect with the time they lived in the square. Wade writes out of hermeneutic of generosity, and  I deeply appreciated that, as well her placing these women within the broader social and political currents in which they worked and  interacted. 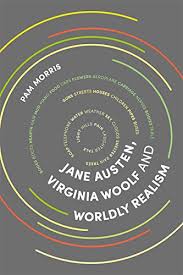 Pam Morris, Jane Austen, Virginia Woolf and Worldly Realism: I read this book, too, early in the year, before Covid hit. I found it an immensely satisfying analysis of similarities between Austen and Woolf's writing, rooting both of them in a Scottish Enlightenment outlook that values the concrete. It was a book I wanted to be longer: how often does one say that about a scholarly work? It is very expensive, a problem in and of itself, but I was able to find a low cost used copy in superb condition and assume others could. 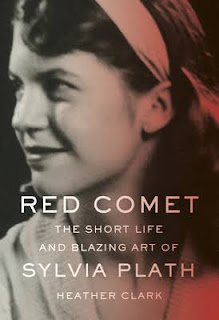 Heather Clark, Red Comet: As with Blaisdell's Creating Anna Karenina, I blazed through this new Plath biography in record time--at least after the  somewhat murky first part of her life. From the point  Plath arrives in New York for her Mademoiselle internship to her final days, I couldn't put the 800 page volume down (or more precisely, the laptop on which I was reading it). Clark at times gives Hughes too much of a break, but at other times skewers him, such as when as she quotes those who opine Plath's work will last while his won't. Clark shows Plath's dedication to her writing as a vocation, and  Plath's development from a sometimes cringe-inducing student poet to her Ariel days, in which her poetry breaks all bounds.  Clark also offers a convincing  theory as to why Plath committed suicide. As an aside, I read recently that Ted Hughes and Prince Charles were friends, uniting over a shared interest in environmentalism. It is not hard to imagine that these two entitled men bonded ever more strongly over both having wives who far overshadowed them. 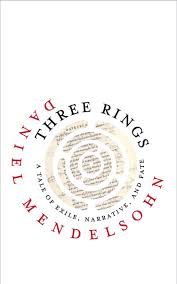 Daniel Mendelsohn Three Rings: This is difficult-to-describe book but it delighted me in the way it brought together the Odyssey, François Fénelon's  seventeenth-century sequel to the Odyssey, called The Adventures of Telemachus, and Erich Auberbach, author of Mimesis, while weaving in the repeated circular walk in Proust's Recherche and Mendelsohn's family's encounter with the Holocaust.

In a year in which politics brought con artistry to the forefront, I read several books that revolved around the theme of the con. The best was Veritas: A Harvard Professor, a Con Man and the Gospel of Jesus's Wife by Ariel Sabar, which uncovers how a man who ran a  internet porn site convinced a prominent Harvard School of Religion scholar to believe a crude forgery of a purported Biblical text was real--and exposed some of the unraveling of academe in the process. I'll also mention Marsha Gessen's highly readable Surviving Autocracy, a book that if fortunately fading from relevance, did a superb job connected the dots on Trumpism.